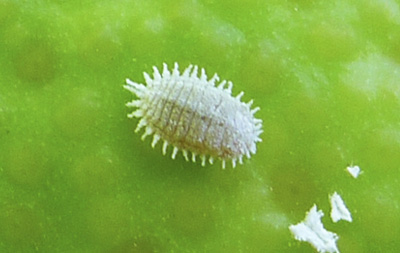 There are several species of mealy bugs: the citrus mealy bug (Planococcus citri), and those that attack ornamental and horticultural crops (Pseudococcus affinis, Pseudococcus longispinus). They occur in tropical and subtropical areas of the world.

The mealy bug will appear on the leaves of the plant as long as there are no fruits on the plant. As soon as the fruits are formed the mealy bugs will concentrate on them, forming sticky cottony masses with abundant production of honeydew. The honeydew and the presence of sooty mould causes severe damages in the fruit quality and alter the plant physiological processes.

It attacks mainly orange, lemon and ornamental, such as oleander and geranium.

PRODUCTS FOR BIOLOGICAL CONTROL OF MEALYBUG